The interaction of structural, fluidic and electrostatic fields is partitioned into the electrostatic field and the fluid–structure interaction (FSI) using the block Gauss–Seidel method. The FSI is split into the pressure field and the other using a projection method, where the intermediate state variables are used for the splitting without generating computationally expensive Schur complement matrices. 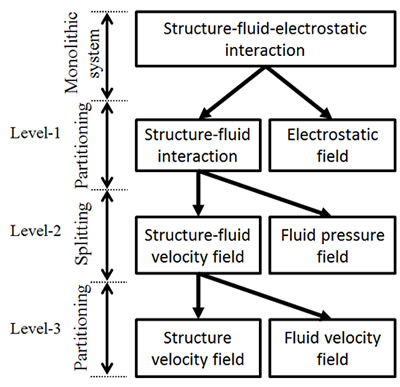 Coupled finite element analysis method is studied for the magnetic damping phenomenon which appears in thin shell conducting structures located in a strong electromagnetic field of future fusion reactors and magnetically levitated vehicles. The coupled monolithic mode superposition method for the interaction between eddy current and thin shell structures was developed to solve this strongly coupled problem. Evaluation method of the coupled characteristics, parallel coupled analysis method, and the numerical instability of the staggered or partitioned coupled analysis method are investigated.

In this study, a projection method for the monolithic interaction system of an incompressible fluid and a structure using a new algebraic splitting is proposed. The proposed method splits the monolithic equation system into the equilibrium equations and the pressure Poisson equation (PPE) algebraically using the intermediate velocity in the nonlinear iterations. Since the proposed equilibrium equation satisfies the interface condition, the proposed method is strongly coupled. Moreover, the proposed PPE enforces the incompressibility constraint. Different from previous studies, the proposed algebraic splitting never generates any Schur complement. The proposed method is applied to a channel with a flexible flap, which is one of typical test problems, where its superior computational efficiencies are demonstrated.

Resistance spot welding technique is widely used in industries, where welding conditions are determined based on their longtime production experiences. The phenomena during the welding process, however, are not simple but complicated because of the coupling effect among electric current, heat generation, heat conduction, deformation with contact and contact electric resistance. Since advanced coupled analysis techniques are needed for such triply coupled analyses, neither the understanding of mechanisms of the coupled phenomena itself nor the application for determining optimum welding conditions considering the effect of the coupled phenomena has not been realized yet. Mechanisms of the coupled phenomena during resistance spot welding are examined using coupled finite element analyses.

In this study, the passive pitching due to wing torsional flexibility and its lift generation in dipteran flight were investigated using (a) the non-linear finite element method for the fluid–structure interaction, which analyzes the precise motions of the passive pitching of the wing interacting with the surrounding fluid flow, (b) the fluid–structure interaction similarity law, which characterizes insect flight, (c) the lumped torsional flexibility model as a simplified dipteran wing, and (d) the analytical wing model, which explains the characteristics of the passive pitching motion in the simulation. Given sinusoidal flapping with a frequency below the natural frequency of the wing torsion, the resulting passive pitching in the steady state, under fluid damping, is approximately sinusoidal with the advanced phase shift. We demonstrate that the generated lift can support the weight of some flies.

In this study a finite element analysis using hierarchal decompositions for the interaction of structural, fluidic and electrostatic fields is applied for vibration analyses of a MEMS structural component. The developed finite element analysis is applied for a micro cantilever beam actuated by the step electrostatic force in vacuum and air. It was demonstrated from the comparisons among the numerical and experimental results that the proposed analyses provide the results consistent with the experimental results. It follows from the present results that the numerical analyses taking into account the interaction of the structural, fluidic and electrostatic fields are required for the accurate predictions of the vibration characteristics of the MEMS structural components. 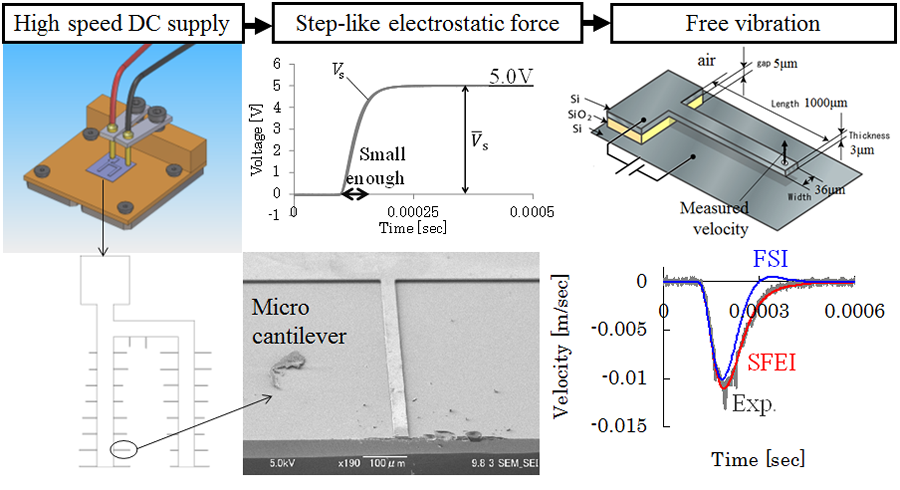 Piezoelectric effect is widely used in MEMS for both sensor and actuator applications. In recent years some researchers are extensively developing FEM for Micro–Electro–Mechanical systems (MEMS). From this view point, a coupled finite element method for structure-electric interaction / piezoelectric analysis of MEMS actuator is presented using different kinds of numerical algorithms. The numerical efficiency and stability performance of the proposed algorithms is very important and were evaluated thoroughly in this work. The interaction of air should be taken into account in the case of micro thin membrane in air. Therefore, we have been developing the analysis method for the structure–fluid–electric interaction. The method will be applied for the design and development of novel MEMS. 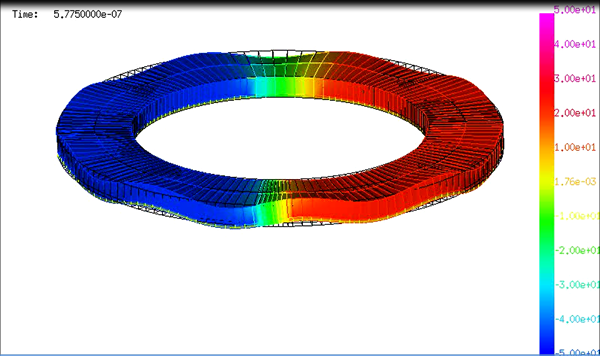